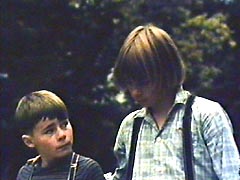 This is the story of a young boy growing up during the depression in Arcola, Saskatchewan. Brian O'Connel, a sympathetic and good-hearted character faces the challenges of growing up. Through the death of his father, and the stresses of school he learns about himself and about the harsh world in which he lives.

This film is about one woman's triumph above all odds, surviving and raising a family in Canada's great white north. Voyaging with her fur-trapping husbands into the cold, wild, prairie, she becomes accustomed to obstacles but not defeat. After her husband dies, widowing her with three young children, she must find her own way to make it through the storms of life that ravage her family's foundations.

QuickTime Clip: The horses get restless during the river crossing. 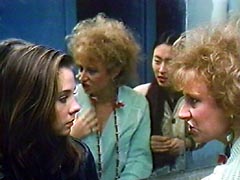 A troubled daughter takes her alcoholic mother from the hospital for a trip to Italy, where the mother has always wanted to go. The differences between the mother and daughter are highlighted; the passion in the mother, and the fear and lack of passion in the daughter. Comedic moments are added by the son and the paramedics he calls, one of whom doesn't speak a lot of English. The film ends with the mother dying and the daughter heading off alone to Italy to find her passion.

QuickTime Clip: The mother and daughter visit each other at the hospital.