Ryan Randall is an accomplished film and media technician at Queen's. He  teaches production fundamentals and serves as the technical director of the Vulnerable Media Lab.

He’s also the cinematographer behind Workhorse, winner of the 2021 Best Cinematography(link is external) in a Feature Length Documentary award from the Academy of Canadian Cinema and Television.

“[Workhorse] is a documentary I made with my long-time collaborator and best friend, Cliff Caines,” Randall said in an interview with The Journal.

“We met in arts school on the very first day. We were getting our ID photos taken and just happened to be next to each other in line and started chatting.”

This friendship between Randall and Caine, which began at the Ontario College of Art and Design (OCAD), has since bloomed into twenty collaborative films. Workhorse is their second feature-length documentary, and its success reflects their relationship.

“Film-making is a collaborative art,” Randall said. “It’s not just one person doing anything. Collaboration is key to how effective and creative things can really be. [Caines and I] don’t need to say too much sometimes; we know what each other is going for.”

The initial idea behind Workhorse came from Caines observing a horse pull.

“He was at an agricultural fair in the fall of 2014,” Randall explained. “A horse pull is a team of horses, and they hook them onto dead weight, a sled. They try and drag it fifteen feet. The weights get up into the tens of thousands of pounds.”

“[Caines] saw, in that moment, that connection between human and animal, and the histories of that relationship through all of time. That was the starting point.”

While Workhorse started as visual documentation of a horse pull, it quickly became more nuanced.

“As the idea started to develop, we looked more at other uses of horses,” Randall said. “It’s a film built out of three vignettes, three little stories.”

The first focuses on a forest logger. Randall explained how using horses is much more environmentally sustainable than machines—they can drag fallen trees out of the woods with minimal damage to the forest floor.

The film’s second vignette highlights farmers using horses in their fields. Not unlike logging, the use of horses provides many sustainable advantages.

“They grow the wheat that feeds the horses, then the horses drop manure in the fields that helps fertilize the fields,” Randall said. “It creates a closed-cycle system.”

The film’s final act showcases the horse pull. This portion is meant to entertain viewers by providing them with a visual spectacle. However, accurately depicting the size and scale of the horses remained a priority for Randall across all three vignettes.

“These horses are massive. In terms of cinematography, one of the early things [Caines and I] were discussing was shooting it to be on the big screen. We were reviewing other documentaries and feature films that used horses to get the sense of scale.”

“That was something we wanted to translate visually: the scale, the enormity of these lovely beasts.”

“It was shot in widescreen, 4k throughout. It was meant to be presented big.”

Unfortunately, pandemic-related theatre closures quickly relegated Workhorse to small screens after its initial release at the Montreal Documentary Film Festival in October of 2019.

Workhorse has prevailed despite an atypical festival run. Winning the 2021 award is not only a testament to Randall’s excellent cinematography, but also some well-earned recognition for the entire team behind the documentary’s creation.

Workhorse has allowed Randall to reach desirable heights. Beyond collaboration, he stressed the importance of humility when asked to advise aspiring filmmakers.

“How you carry yourself is critically important. Be a good collaborator, be a good person. [It’s important] to realize the frivolity of making motion pictures, how lucky we are to focus our life passions into something like that rather than struggling for safety and food.”

“You have that privilege, so work with it and do it,” Randall said. “Don’t fear failure.” 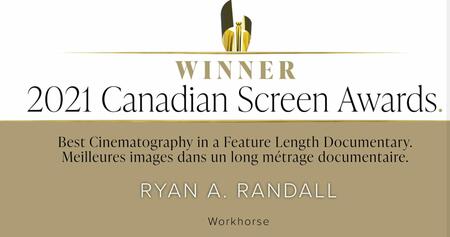