The dossier features 8 essays by theorists, practitioners, and programmers unpacking how co-creation practices were mobilized for teaching, producing, programming, protest, political actions, new theorizations, and critique during the COVID-19 pandemic.

These short essays engage the crises that shape the current moment and their demands on representation. But they also argue for new collective, resourceful forms of imagination, speculation, and social interaction.

We were standing in front of a whiteboard in Liz’s study in Montreal, and Dorit was listing turning points in the process of making Jerusalem, We Are Here (2016). JWRH is a participatory interactive documentary that digitally inscribes Palestinians into the neighborhoods from which they were expelled during the 1948 war. Liz had spent the week before “mapping” key moments and turning points in her project The Shoreline (2017), an interactive documentary on the impacts of over-development and sea level rise that she co-created with students, documentary makers and educators in more than forty coastal communities. The reflection exercise Liz had undertaken was guided by Leith Sharpe of Harvard University.

On the whiteboard, Dorit drew an axis for the life span of the JWRH project, and then started adding sticky notes, bubbles, arrows, and text. We realized quickly the most interesting moments in Dorit’s emerging visualization were the messy areas on the board: unexpected opportunities where participants changed roles, where output and media were reconfigured, and where ethical concerns were at the forefront. Each of Liz’s follow up questions led to more insights and information on the board.

Having a chance to process together the highs and lows, the mishaps and turning points, and the lingering concerns was not only insightful but affirmed our shared conviction that process is as important as product. We quickly asked ourselves: can we use visual mapping to help convey the complexity, messiness, and non-linearity of participatory work to ourselves and to others? And we discovered that a non-linear mapping visualization provided a rich testament to the nature of participatory processes.

That session instigated four years of collaboration as rich and complex as those creative projects we were mapping. Like all co-creative processes, we were engaging in co-learning, a slow conversation rooted in our situatedness, our teaching, our research-creation practice, and in contemporary political realities. To date, this ongoing collaboration has included workshops, class visits, the creation of an online tool, and a new opportunity to co-teach. 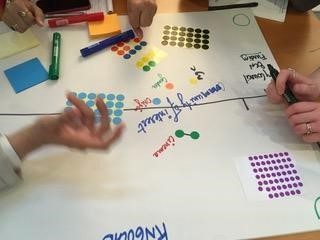