Inside the cinema it is dark and cool. Our cameraman is ready, and I let the projectionist know he can open the red curtains. A digitized silent 16mm reel from 1947 starts playing, and the projectionist exclaims: “This was filmed here! I know exactly where it is.”  When the eight-minute reel is over, and we have filmed from all angles, the projectionist unlocks a backdoor, and takes us to a parking lot, from which we can see remnants of the old sign:  The Regent theatre.  We are at Jerusalem’s Lev Smadar, an art cinema beloved and protected by many Jerusalemites.  Before Israel was established it belonged to a Palestinian, Ferdinand (Nando) Schtakleff, who owned a 16mm camera, and filmed home movies of life in Jerusalem, including coming to work at the theatre, and signing a deal at the MGM offices in Tel-Aviv. 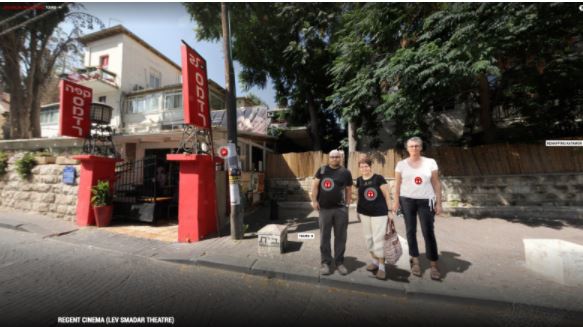 These home movies are incorporated into Jerusalem, We Are Here an interactive documentary that digitally layers the Palestinian past onto the Israeli present of southern Jerusalem.  The project involved Palestinians from the neighborhood who collaboratively made short poetic films that are embedded into a virtual walk, and an interactive map that is composed with information by the community.  The idea for this project was planted in 2007 when I found a hand drawn map of the neighborhood.  In 2011 I received SSHRC funding, and in 2013-14, during a sabbatical, started working with participants and with Helios Design Labs.  The project was launched in November of 2016 at RIDM and has since screened dozens of times in festivals, academic settings and public screenings.

I came to Queen’s as a specialist in Israeli, and to a lesser extent, Palestinian cinemas.  I studied nationalism, gender and militarism, and expanded my work to include photography, and news media.  At Queen’s I found a department especially supportive of combining theory and practice, and I soon merged my filmmaking background (a BFA from Tel-Aviv University and an MFA from Syracuse University) with my theoretical interests (PhD from the University of Alberta).  In the past few years I have been invested in developing sound participatory media practices, and together with Elizabeth Miller (Concordia) am developing an online tool to plan participatory media projects.

In 2020 I co-embarked on a Research-Creation collaborative venture, this time in Belle Park, in Kingston, Ontario. The Belle Park Project contends with colonial and environmental violence, but also with resilience, resistance, and re-naturalization. Through a series of artistic, and cultural events we make legible, visible and audible the history of a park that sits on a toxic landfill that was dumped on a wetland. At the entrance to the park stands an unmarked Totem Pole, carved by inmates at the Joyceville Institute in 1973 and gifted to the City of Kingston on the 300 years anniversary of European presence. The park leads to a bridge to Belle Island, an indigenous meeting place from time immemorial. Using video, Augmented Reality, performance, podcasts, etc. we animate the space speaking to, and about, its many layers.

“On the WE in Jerusalem, We Are”, in Graylit, Rochester, NY, 8/2020 https://graylit.org/blog/jerusalem-we-are-here

“A Rave Against the Occupation: Speaking for the Self and Excluding the Other in Contemporary Israeli Cinema” in Identity in Motion: An Israeli Film Reader eds. Miri Talmon and Yaron Peleg, University of Texas Press, 2012.

“Brides of Palestine/Angels of Death: Media, Gender and Performance in the case of the Palestinian Female Suicide Bomber,” Signs: Journal of Women in Culture and Society, Summer 2007. Vol.32 #4. Pp. 933-95

Reprinted in Gender Through the Prism of Difference, 4th ed. (eds.) Maxine Baca Zinn, Pierrette Hondagneu-Sotelo and Michael A. Messner, Oxford University Press, 2010. [Listed in the 20 most accessed articles on the Signs website]

“Lessons for the future from Jerusalem’s Palestinian Past.” The Conversation, April 2018

Jerusalem, We Are Here, 2016 www.jerusalemwearehere.com