We're proud to say that not only are we an official "Intelligent Community" but that the BBC named Kingston as one of the greatest university towns in the world. Kingston is a home-away-from-home not only for students from Queen’s, but also for those attending the Royal Military College and St. Lawrence College - nearly 30,000 in all! We are a student town.

Described by students as both “quaint” and “eclectic,” Kingston is big enough to provide all the conveniences of modern life, and small enough for students, staff, and faculty to feel instantly comfortable and at home.

Queen’s is an integral part of the Kingston community, with the campus nestled in the core of the city, only a 10-minute walk to downtown where all the shopping, dining and water sports occur - it's a happening place.

Where to Eat in Kingston

More restaurants per capita than any other city in Canada - we know food - good food.

Visitors can enjoy delicious tastes from around the globe without ever leaving the city and indulge in exquisite foods fresh from the field. Within minutes, you can easily walk to over 75 dining establishments from trendy food trucks to Harper's Burger Bar which was featured on You Gotta Eat Here. We also have all the popular chains like Jack Astors with a rooftop patio with views of Lake Ontario, Lonestar Texas Grill in the old fire hall and the very first Pita Pit.

In addition to all of the usual chain restaurants that we all know and love, Kingston has some local favourites and unique dining experiences such as Chez Piggy, Crave and Sima Sushi.

We are a dining mecca - hope you're hungry.

Within walking distance of campus here's a sampling of what your weekend could be: 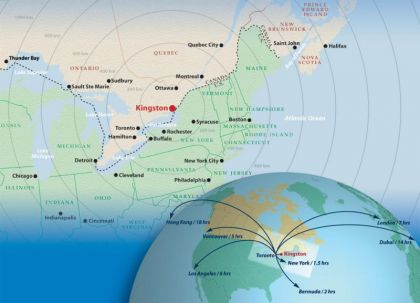 We are half way to everything - that's what makes Kingston perfect. Within a few hours you can drive to Toronto, Montreal, New York State and even less to drive to Ottawa. No daily traffic challenges that these large urban centres experience but still easy to get to when you need to. We have a train station that has frequent stops every day, an airport with daily flights, frequent bus services to other urban centres including one right from campus and city transportation once you're here.