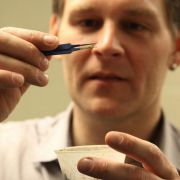 Follow the trail Bill Nelson’s research is blazing and you’ll end up in a room in the basement of the BioSciences Complex. There, after donning a lab coat and elasticized booties that slip on over your street shoes, he guides you into a screened-off area filled with boxes created out of hard pink insulation, resting on industrial shelving, each connected by hoses to a noisy cooling system sitting in the corner. Those boxes, each kept at a separate temperature, house Japanese tea tortrix moths at the different stages of their life cycle – egg, larva, pupa and adult.

“What I do, if you want to put a name on it,” Dr. Nelson says, “is physiologically-structured population biology – in my case by bringing together mathematical and experimental biology.”

Simply, explains Dr. Nelson, an assistant professor in the Department of Biology, most traditional ecology focuses on total populations. It looks at predator and prey relationships, the rise and fall of entire populations, but never generally pays much attention to the individual members of the population under study.

Nelson, by contrast, focuses on the individuals, in particular where they are in their life cycle, and how this generates much bigger population changes. Using data gleaned by studying the life stages of individual members of a species in the lab, he creates mathematical models that can be used to provide insights into the behaviour of larger animal populations in the natural environment.

His goal is to understand the “underlying fundamental principles behind population dynamics.”

Nelson’s initial insights into the importance of the individual in these dynamics came from his work on the zooplankton daphnia, commonly known as the water flea. This incredibly common plant-eating microorganism, Dr. Nelson calls them “the cows of the lakes,” is found in abundance in freshwater everywhere. Considered at the population level, and following standard ecological models, the expectation would be that numbers of daphnia in any population should oscillate wildly as their food supply increases and decreases.

“In those systems,” says Dr. Nelson, “you expect crazy cycles. But you never see them.”

Instead, Dr. Nelson found what altered was the length of time juveniles took to become adults. The less food, the longer each member took to reach maturity, which prevented the expected wild cycles.

Dr. Nelson continues to work with daphnia, and has also expanded his research to examine the importance of the life cycle in bean weevils – drawing him away from his initial work as a freshwater biologist to concentrating on terrestrial insects. His goal, always, has been to “push his research,” and take it in new directions.