Experience on the set 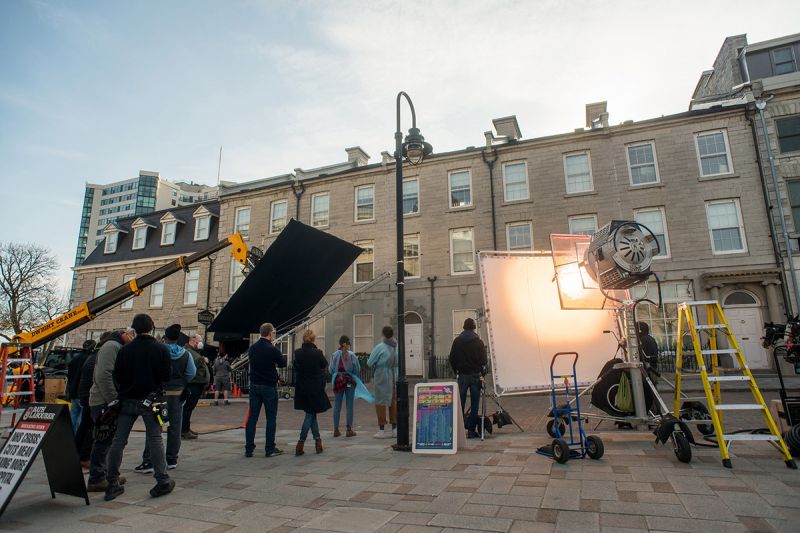 When the Netflix production Locke & Key recently filmed scenes in downtown Kingston it was an opportunity for students in the Queen's Film and Media program to gain some hands-on experience. (Courtesy Kingston Film Office)

When the Netflix production Locke & Key recently set up in downtown Kingston to shoot some scenes for upcoming episodes it was an opportunity for a group of Queen’s Film and Media students to gain some valuable hands-on experience.

The arrival of the drama series is the latest win for the Kingston Film Office and Film Commissioner Alex Jansen, who is also a lecturer and term adjunct with the Department of Film and Media.

This wearing of two hats – for the City of Kingston and Queen’s University – has resulted in a number of mutually beneficial projects for both communities, including Queen’s students.

Among the courses that Jansen teaches at Queen’s is FILM 457/458 - Film and Media Practicum which connects students with industry partners for experiential learning through workshops, training opportunities and work placements. Through the course, offered for the first time in 2019-20, students gain in-person experience in areas such as film, television, interactive and gaming development, and much more. However, with the arrival of COVID-19, the course had to pivot, delaying its start until the Winter 2021 term and finding alternative methods of learning.

When Locke & Key committed to Kingston, however, this provided a special opportunity for Queen’s students, as well as alumni, to work hands-on in a volunteer capacity outside the course.

“With Locke & Key there were over 150 cast and crew in town with this large-scale production that students wouldn’t otherwise get to be around,” says Jansen, who founded the Kingston Canadian Film Festival during his time as a student at Queen’s. “While the practicum has been pushed back to January due to COVID-19 we were still able to get eight current students and three recent graduates involved in different capacities.”

The positions were primarily as local services personnel, where they help out with some of the smaller but still important work around the production. Other students also got involved in background roles. During the practicum, students can also gain experience at their placements from planning, camera work and editing to marketing, distribution, and everything in between.

The main goal is for students to gain experiences they otherwise would not have access to while also building connections that can help them once they begin to seek employment in the sector. Of the 20 students in the initial course, a number of them were able to secure employment – either short-term or full-time – with one of their placements.

“We are essentially trying to bridge students into the actual industry through these placements and that’s been a big goal of the courses that I teach,” says Jansen who also teaches FILM 450 - The Business of Media. “It’s a really, really exciting time with record levels of production, and we are doing our best to connect these incredibly bright students to the industry by preparing them as much as possible.” 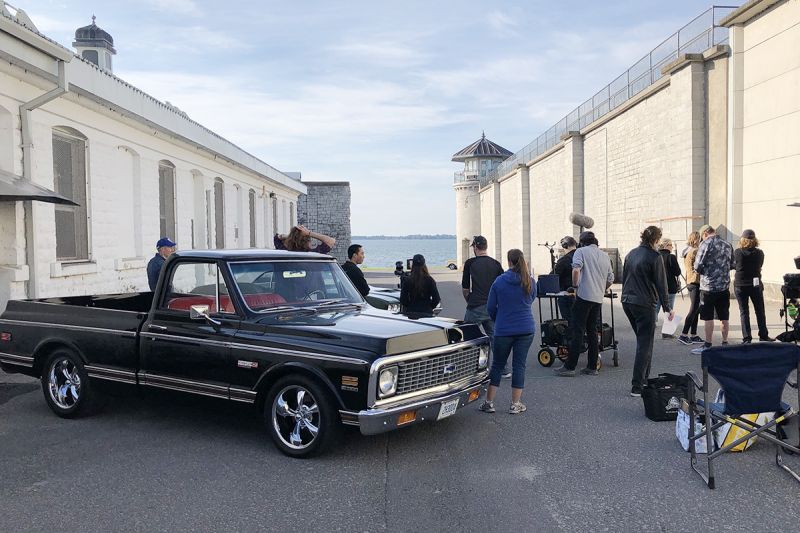 Students in the Film and Media 2019-20 practicum course work on the film The Prize, during a shoot at the Kingston Penitentiary. (Courtesy Kingston Film Office)

In the practicum course, students first undergo foundational training, including a two-day Director’s Guild of Canada production assistant workshop, to prepare them for the workplace. They then must complete 120 hours through placements with various program partners. In many cases, Queen’s alumni who are looking to support their alma mater are involved in creating and building these partnerships.

The close connection with the Kingston Film Office has been an invaluable source of opportunities as well. During the 2019-20 course all of the students worked on Murdoch Mysteries when the CBC production shot an episode in downtown Kingston. Some also got to work on Star Trek: Discovery when the science-fiction show shot at Kingston Penitentiary, an increasingly popular site.

Looking ahead, Jansen says that students in the upcoming course will have the opportunity to work on two larger productions that will arrive in Kingston in the new year. With the Film Office securing more productions there will be more opportunities.

On top of being incredibly welcoming to current students, the production was so impressed with their overall experience that they decided to make a generous $10,000 donation to support future practical training and opportunities for Queen’s students.

“We were consistently impressed with the welcome that the city offered to us,” says producer Kevin Lafferty. “We found it to be a fantastic place to work and the shoot was a total success. We wanted to give back some of the goodwill we felt from the city, and as several of our crew members are graduates of Film and Media at Queen’s, we felt making a donation to the school to aid the up-and-coming filmmakers there was the best way of paying it forward.” 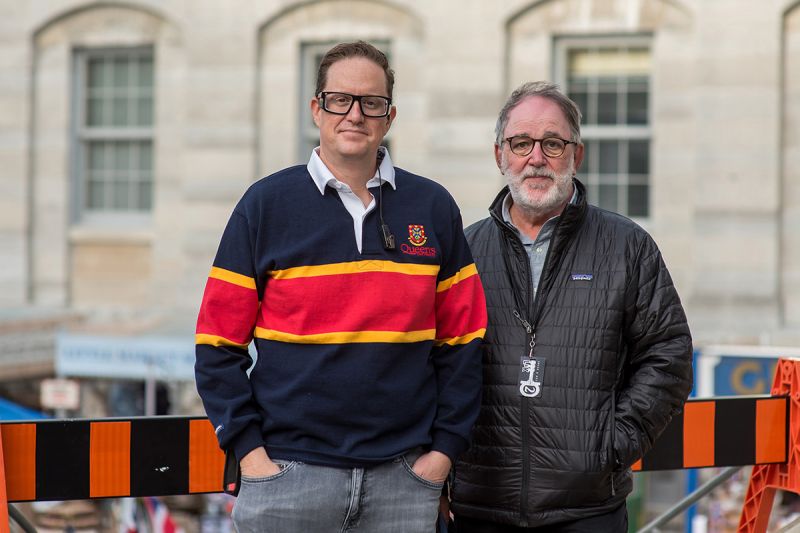 Ari Magder (ArtSci’98), left, and Dennis Chapman (ArtSci’75), like many Queen's alumni, were ready and willing to help out current Film and Media students during the recent Locke & Key shoot in downtown Kingston. Chapman is the production manager and Magder is the first assistant camera for the Netflix production. (Courtesy Kingston Film Office)

For more than 50 years the Department of Film and Media has been educating students who have gone on to a wide range of roles within the entertainment and media industry. Many of these alumni have maintained close connections with the department and are very willing to give back.

One such alumnus, says Jansen, a Queen’s grad himself, is Malcolm White, Vice-President, Portfolio Management and Portfolio Manager at CI Global Asset Management. Seeing a need to connect students with industry partners during their studies, White initiated and supported the creation of The Business of Media course. As part of the course, White himself hosts a luncheon for students in Toronto as part of an annual field trip that also provides opportunities to visit with industry players such as game developer Ubisoft, Mongrel Media, the Toronto International Film Festival and CTV, and many others.

The new Practicum course furthers the department’s broader efforts at connecting students to industry, also supported through generous donations by alumni Teza Lawrence, Michael Souther and Michael MacMillan as well as patron of the arts Leonard Schein. Combined, the Practicum and The Business of Media courses add a new element to a program that has produced successful graduates for decades. Students can take what they learn in the classroom and apply it in real-world situations.

“It’s always been about complementing what the department already does, but creating more of those practical experiences of connecting the students with the industry,” Jansen says.

Visit the Department of Film and Media website to learn more.