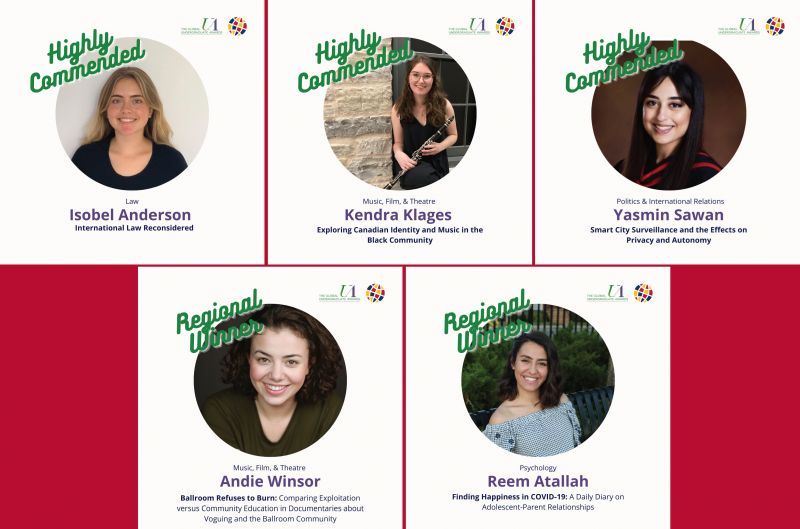 This year 2,812 submissions were received from 410 institutions in 73 countries. In 2016, The Undergraduate Awards programme was split into seven regions: Africa & the Middle East; Asia; Europe; Island of Ireland; Latin America; Oceania; and USA & Canada.

“Students in the Faculty of Arts and Science are having a positive impact across a diverse range of fields and disciplines,” says James Fraser, Acting Associate Dean (Teaching & Learning). “These honours from the Global Undergraduate Awards are wonderful examples of this impact on the global stage. We join in congratulating the five winners on their hard work and creative contributions, and their supervisors and departments for their support and mentorship.”

Highly Commended students are those whose submissions were ranked within the top 10 per cent of submissions to their category across the world. Earning the honours for FAS were:

Regional Winners were the highest-performing highly commended entrant in the North American region in their respective categories. Earning the honours for FAS were:

“I really enjoyed working on my undergraduate thesis, and I am thrilled that it has been recognized and celebrated by the Queen’s Department of Psychology, Canadian Psychological Association, and now the Global Undergraduate Awards,” says Atallah. “I am grateful for all the support I have received from Drs. Wendy Craig, Ryan Persram, members of The Bully Lab, and Department of Psychology. These awards are the highlight of my undergraduate degree and will be the best memories I carry with me moving forward.”

To learn more about the Global Undergraduate Awards visit the website.