Note: This article was originally written by Phil Gaudreau and posted in the Queen's Gazette.

Queen’s University and Tsi Tyónnheht Onkwawén:na are partnering to deliver a certificate in Mohawk Language and Culture. 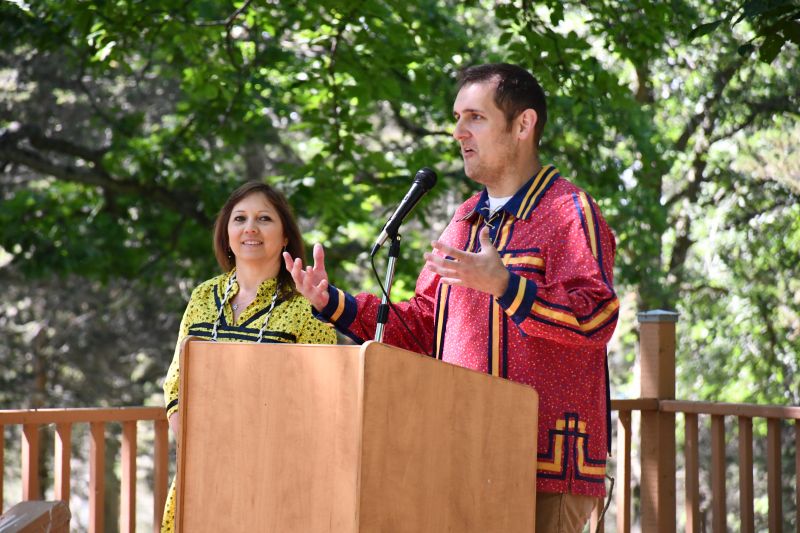 Language forms a critical part of identity. Canada’s Indigenous languages form not only part of the country’s cultural mosaic but also carry history and meaning for millions of people from coast to coast to coast.

Yet, of the 60 unique Indigenous languages recognized by the Assembly of First Nations (AFN) in Canada, all but one (Inuktitut) are considered critically endangered. A 2009 report from United Nations Educational, Scientific and Cultural Organization (UNESCO) found that dozens of Indigenous languages in Canada were ‘near death’, and that Canada had the fifth highest number of endangered languages in the world.

In 2015, Canada’s Truth and Reconciliation Commission called on the government and the higher education sector to increase their support for Indigenous language revitalization. The intent was to ensure the languages would be passed onto the next generation, and that credentialed programs would be created to educate others in these languages.

On National Indigenous Peoples Day 2018, Queen’s University announced a partnership with Tsi Tyónnheht Onkwawén:na which would see the two organizations work together to deliver a certificate program in Mohawk Language and Culture in the community of Tyendinaga.

“To move forward in a good way, it is imperative that we forge strong alliances – such as this partnership – to ensure that we as an institution are responding appropriately to the recommendations of the TRC and to the needs of local Indigenous communities,” says Daniel Woolf, Principal and Vice-Chancellor. “This certificate is distinctive in the way it provides training in both Mohawk language and culture directly to members of the Tyendinaga community, and I am proud that Queen’s is a part of this important initiative.”

Tsi Tyónnheht Onkwawén:na is based in Tyendinaga Mohawk Territory and is dedicated to the revitalization of the Mohawk language, culture, and worldviews.

“We have been delivering Mohawk language and culture courses in the Tyendinaga community since 2004,” says  Hill, Director of Tsi Tyónnheht Onkwawén:na Language and Culture. “What is new and unique about this certificate is our partnership with Queen’s University and fact that students who complete the certificate will be able to apply their credits towards a degree at Queen’s. These university credits are definitely an added bonus for our students.”

The courses will be delivered by Queen’s University’s Faculty of Arts and Science, Department of Languages, Literatures, and Cultures. This certificate will provide students knowledge of the Mohawk language while embedding the students in culturally rich learning experiences. Courses will introduce students to the many traditions, histories, and worldviews of the Mohawk people.

The certificate is intended to be completed over two years. Completing the course will involve both in-person instruction along with homework and some online learning.

Thanyehténhas (Nathan Brinklow) is Turtle Clan from Tyendinaga Mohawk Territory, and will be one of the certificate’s instructors. Mr. Brinklow also teaches Mohawk language courses at Queen’s, but he grew up without speaking or understanding Mohawk.

“I did sing hymns with my grandmother, which sparked my interest in the language leading to me learning Mohawk as an adult,” he says. “In my experience, language and culture are inseparable. Mohawk is a vivid language that allows the speaker to see how previous generations encountered and interacted with the world.”

This launch follows the creation of an on-campus Indigenous Languages and Cultures certificate program, focused on Mohawk, Anishinaabemowin, and Inuktitut languages and cultures.

For more information on this new program, visit queensu.ca/artsci/mohawk