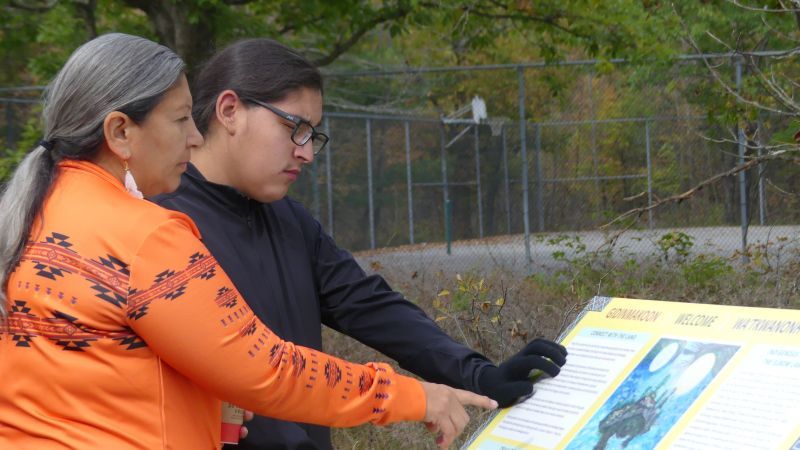 On the path to understanding

With funding provided by TD Friends of the Environment and support from the Tsi Tyónnheht Onkwawén:na Culture and Language Centre in Tyendinaga, the Office of Indigenous Initiatives at Queen’s University and in partnership with the Kingston Indigenous Language Nest (KILN), the Queen’s University Biological Station (QUBS) has created four multi-lingual interpretative signs and five trail app stations reflecting local Indigenous cultural heritage.

The new signs are installed along an accessible trail at the Elbow Lake Environmental Education Centre funded by the Community Foundation of Kingston & Area and the Township of South Frontenac. Adjacent to the accessible trail is a new outdoor classroom, supported by a second TD Friends of the Environment grant and private donors. This space allows them to bring outreach activities to an outdoor setting, surrounded by trees with the sky as the ceiling.

On Saturday, October 1 approximately 40 contributing community members from Katarokwi and surrounding regions in addition to funders gathered at Elbow Lake to celebrate the official launch of the signs.

“This signage project is important to Queen’s efforts towards decolonization and reconciliation,” says QUBS director Stephen Lougheed. “It involves many Knowledge Keepers, it helps connect people to the land – Indigenous and non-Indigenous alike, it showcases the richness of Indigenous knowledge, and it contributes to revitalization of Indigenous languages. It helps us move beyond rhetoric to tangible action.”

The project got its start with consultations with local Anishinaabe and Kanyen’kehà:ka Knowledge Keepers on the land at the Elbow Lake Environmental Education Centre (ELEEC) regarding the content that should be included on each sign and how the signs could most effectively be used as language learning tools. 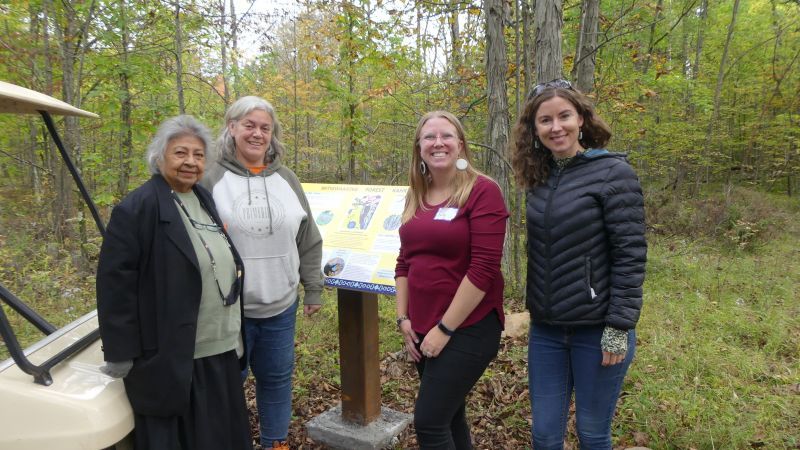 “From this input it was decided that the proposed App stations must include audio recordings of local Indigenous languages. Because Anishinabemowin and Kanyen’ke:ha culture and knowledge rely on oral traditions it is important that languages are heard during learning.” says Alice Johnston. “Accordingly, QUBS also created App stations that enable visitors to take a self-guided tour of the land highlighting Indigenous understanding of the local landscape and providing a platform for Anishinaabe and Kanyen’keha:ka language learners to hear the language. ”

The project led to the installation of four 24” x 48” interpretive signs highlighting local Indigenous knowledge and languages related to animal and plant species found along the trail’s the four distinct habitat regions: forest, meadow, wetland, and rocky barren. Signs also feature artwork by local artists. The associated App stations include additional information about key animal and plant species, Indigenous stories narrated in local languages, and audio files where Anishinaabemowin and Kanyen’keha words and phrases can be listened to. 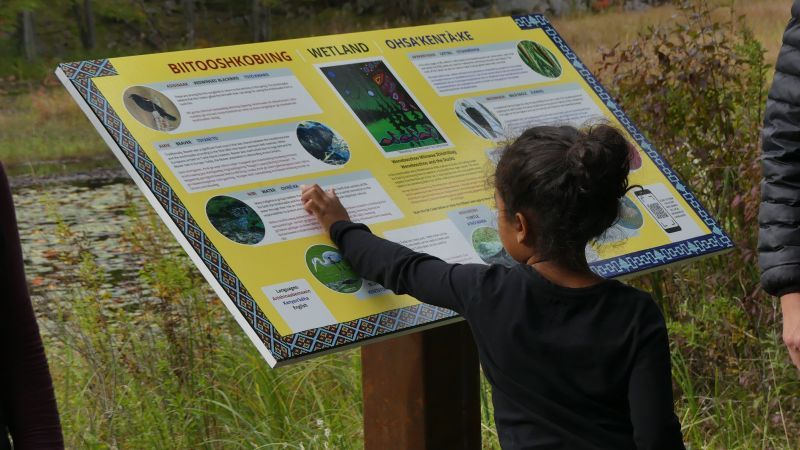 Indigenous languages developed in relationship with the nature, lands and waters of the region. This project highlights Indigenous understanding of the local landscape and provides a basic platform for Indigenous language learners.  As part of the response to the Truth and Reconciliation Task Form Commission of Canada's final report, QUBS is trying to take an active role as an ally in addressing the broad themes of the report. This includes relationship-building and promoting an awareness of the histories and contemporary issues facing Indigenous Peoples, specifically related to the ecological interpretations of our local landscape.