Queen’s University researchers and partners are monitoring the health and movements of polar bears in an innovative approach to studying climate change in the Arctic.

The polar bear is an apex predator whose distribution encompasses a vast area of diverse habitats, spanning land and sea ice. Changes in its lifecycle and population declines are often seen to reflect environmental changes stimulated by shifts in global climate in the Arctic. Monitoring of polar bear activity and health in near-real time is not only necessary to ensure their persistence globally, but it also provides important insights into the state of Arctic ecosystems. 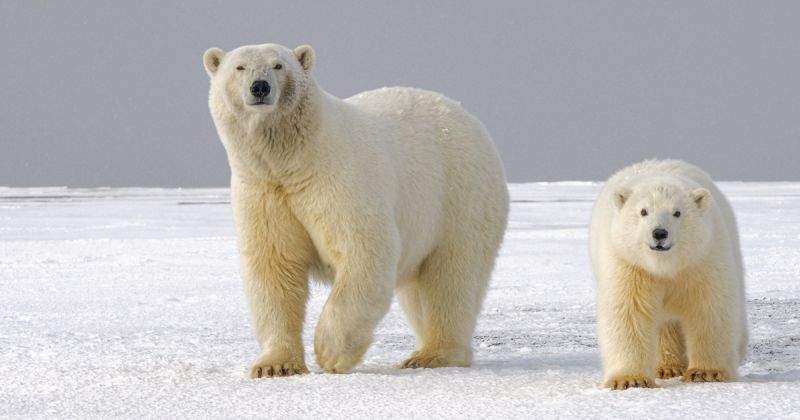 Traditionally, monitoring of polar bears has been completed through an aerial censusing of populations at 10- to 15-year intervals. For the past five years, the BEARWATCH team has been investigating a different and complementary approach, where bears can be identified individually using an innovative fecal-based molecular toolkit. A critical piece of the toolkit depends on gut-origin epithelial cells that are shed during defecation and the use of genomics to identify individual bears. Bear scat is then analyzed to obtain information about a bear’s sex, recent diet, chemical exposure, and overall health and wellbeing. This method will enable flexible and verified collection of data in near real-time, allowing for establishment of a clear baseline of Canadian polar bear health and genetic diversity against which future climate change impacts can be measured.

The project originated from long-standing relationships between Queen’s researchers, the community of Gjoa Haven, and the Government of Nunavut. The success of BEARWATCH has built on these relationships with contributions from a more diverse set of stakeholders that span northern communities across the Arctic, Inuit organizations, the governments of Yukon, Northwest Territories, and Nunavut, and researchers from Denmark, Norway, Russia, and the United States.

Given the degree to which Arctic Indigenous peoples are affected by climate change, and the importance of the polar bear in Inuit culture, Dr. Lougheed and his team depend on TEK and insights of local experts for wildlife conservation.

“What has struck me most is the depth and richness of traditional knowledge,” Dr. Lougheed says. “I am in awe of how attuned Northern peoples are to other species and how capable they are at persisting in these challenging environments.”

The project team also works closely with members of the 1st Canadian Ranger Patrol Group (1 CRPG) for navigating the vast Canadian Arctic. 1 CRPG is tasked with maintaining a Canadian Armed Forces' presence in the remote communities of the north. The intimate knowledge of oft-unknown surroundings of the Rangers enables them to provide insights and samples from regions that are distant from northern communities. 1 CRPG previously helped to build research cabins in the environs of Gjoa Haven and has been instrumental in facilitating northern research for BEARWATCH and other important northern scientific work.

“1 CRPG was happy to assist in this research project. Canadian Rangers are members of their local communities and supporting this study will serve to ensure better long-term stewardship of the lands they live in,” says Capt. Chris Newman, 1 CRPG Unit Public Affairs Representative. “As experts of their local areas, being able to impart local knowledge is one of the cornerstones of the Canadian Ranger mandate.”

One of the research cabins built by 1 CRPG in the environs of Gjoa Haven to support northern research for BEARWATCH and other projects. (Photo supplied by the BEARWATCH team)

BEARWATCH is now in its fifth year and the project toolkit is in its end stages of development and testing. The final version will include a genomics approach called genotyping-in-thousands for identifying individual polar bears from scat alone, as well as DNA metabarcoding for assessing bear diet and methods for gauging contaminant exposure. Preliminary results have indicated that scat-based tracking is effective at distinguishing individual bears from each other and understanding plants and animals consumed by bears and other indicators of health. The next step involves presenting the toolkit to northern communities and governments for feedback and eventual implementation.

This work shows immense promise for establishing Canada as a global leader in polar bear conservation and wildlife management.

“Canada has about two-thirds of the global polar bear population and is one of only five nations with this iconic species,” Dr. Lougheed points out. "From this vantage alone, Canada is compelled to lead in polar bear protections.”

The success of this toolkit and its implementation may serve as a model for conservation efforts for other wildlife species worldwide.

The researchers are hopeful that polar bear management will become an area of true partnership and shared decision-making with Indigenous peoples, drawing on the strengths and values of both TEK and western science and perhaps taking one small step closer to reconciliation.

The story originally appeared in The Gazette.