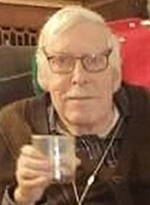 The Queen’s community and the Faculty of Arts and Science is remembering Robert (Bob) Pike, a Professor Emeritus in the Department of Sociology, who died Saturday, Jan. 9. He was 82.

Dr. Pike grew up in England and attended the London School of Economics, graduating with a BA in Economics and Sociology (1961), and then his master’s. He would then travel to Australia and earn the first-ever PhD in sociology from the Australian National University.

After first teaching at the University of Alberta, he arrived at Queen’s in 1969 and would stay until his retirement in 2002.

Dr. Pike was a sociologist of communication, best known for his jointly authorized book with Dwayne Winseck: Communication and Empire (2006).

Dr. Pike was the head of the Department of Sociology for 11 years, pioneering the development of sociology as an independent discipline at Queen’s within the Faculty of Arts and Sciences. Known as an engaging teacher and a very supportive and encouraging colleague, he was a person of principle who showed a generous face to all.

Dr. Pike also was among the first to address equity concerns on campus, including racism and pay equity for women, adds Annette Burfoot, Professor and Head of the Department of Sociology. Professor Emeritus Vince Sacco notes that his colleague was a big opera fan who also followed Monty Python and liked puns: “Of course being named Pike left him vulnerable to the word player brothers."

“He was a man of integrity. He could always be counted on to help pitch in where help was needed. He encouraged others in their research, was a team-player in collaborations, and championed innovation,” says Professor Fiona Kay. “He was tremendously supportive of graduate students and enjoyed mentoring junior faculty. I will miss the twinkle is his eye when he was joking and his roaring laugh when he told stories. He was proud of his family and cared very much for his children's happiness. He was just a lovely man. I shall miss him.”