Last weekend marked the beginning of our 50th year in the School of Computing. The festivities welcomed back our alumni, our previous department heads, and our retired faculty and staff. Together with many of our current faculty, staff, and students, we acknowledged and celebrated this community for how it has shaped the School into what we are today. Over 100 attendees from ages as young as 2 months, Countries as far as Australia and Kuwait, and alumni since 1978, joined the celebration. 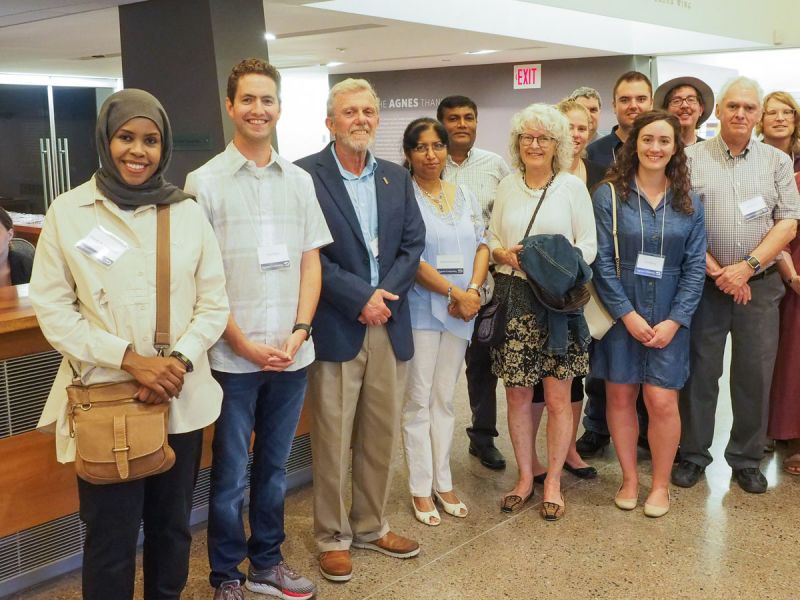 The diversity of this community led to a weekend of storytelling. The events were filled with hums of conversations, sharing stories of our times at Queen’s School of Computng, where our lives led us after we graduated to today, and how computing set the pathway for these journeys.

Our Opening Reception at the Agnes Etherington Art Centre included live music from our very own David Rappaport and featured special guests Barbara Crow, Dean of Arts and Science and Fahim Quadir, Vice Provost and Dean, School of Graduate Studies.

The Campus Tour provided our alumni with stories about all the initiatives at Queen’s over the previous 20 years. Many who had not visited the School in over 25 years could not believe the change as they explored new buildings such as Mitchell Hall, the Recreation Centre, Stauffer Library, and Goodes Hall. The favourite was exploring our home base Goodwin Hall and reminiscing on our times of the past.

Our 50th Banquet at Four Points by Sheraton featured guest speakers Bob Crawford, Mike Jenkins, Selim Akl, Tom Bradshaw, and Liz Hache who shared their stories about the history, people, and technology of our School from 1969 to present day. Wendy Powley was our MC for the evening.

At the event, Hossam Hassanein, Director of Queen’s School of Computing, announced two new Scholarships funded by the School that will help support our current and future students. You can contribute to these new Scholarships in memory of someone at https://www.givetoqueens.ca/computing50th

The Karilee Whiteway Scholarship for Women in Computing

This annual scholarship of $1500 will support female QSC students to attend the annual Canadian Celebration of Women Conference founded by the Women in the School of Computing group in 2010.

Established in 2019 on the occasion of the 50th anniversary of the founding of the Queen’s School of Computing (QSC), and in memory of all members who have served the School, this scholarship is awarded in September of each year to a QSC student registered in their third year of study. The recipient, selected by the QSC, is a student who has achieved distinction both academically and in service to the community.

Hassanein acknowledged all our past Department Heads and those in attendance received plaques to commemorate their contributions to the School. Thank you to our Department Heads:

Lastly, he recognized two past and current staff members for their outstanding service to the School:

Thank you to all who attended and made the start of our 50th year one that we will remember and cherish. We are excited to welcome more of our community to our 50th Homecoming Reception on Friday, October 18th.

Register for our Homecoming Reception to commemorate our 50th year.

Note: This article was originally written by Sara Perosa and appeared on the School of Computing website.