Note: This article was originally written by Anne Craig in the Queen's Gazette.

Formed in 1660, Fellows of the Royal Society (FRS) include eminent scientists such as Charles Darwin, Albert Einstein, and Stephen Hawking, and it is the oldest scientific academy in continuous existence. Fellows are elected in recognition of their exceptional contributions in the fields of science, engineering and medicine. The mission of the RS is to recognize, promote, and support excellence in science and to encourage the development and use of science for the benefit of humanity. 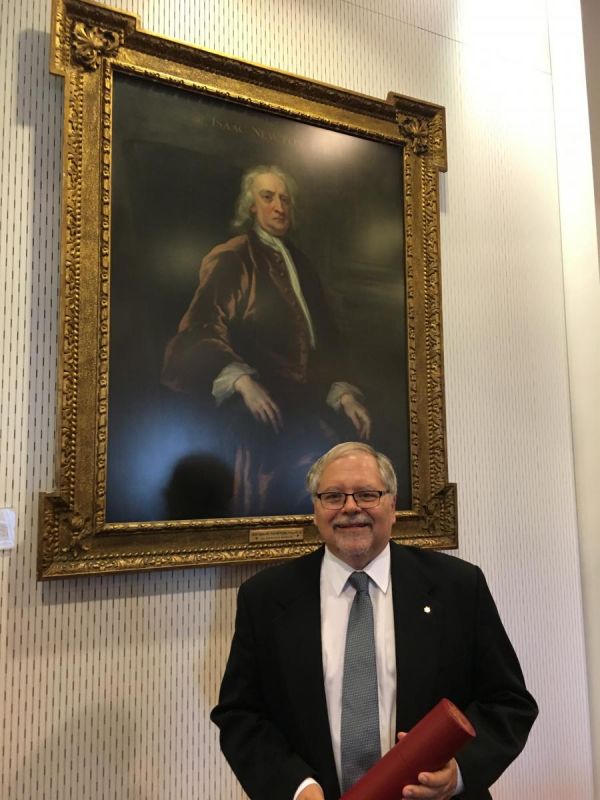 Fellows are elected based solely on the merit of their scientific work.

“An FRS is something I had known about since I was an undergraduate, largely reading about Darwin and other famous scientists, and the history behind the society,” says Dr. Smol. “Of course, it never occurred to me that those letters would ever be behind my name. Just as I was honoured to be elected a Fellow of the Royal Society of Canada over 20 years ago, I am elated at being elected a Fellow of the Royal Society, and to be asked to sign the Charter Book that includes the signatures of people like Isaac Newton and Charles Darwin.”

In 1991, Dr. Smol founded the Paleoecological Environmental Assessment and Research Lab (PEARL), a group of about 40 students and other scientists dedicated to the study of long-term global environmental change. Much of his research deals with using lake sediments to study climate change, acidification, eutrophication, contaminant transport, and other environmental stressors. A significant portion of his research focuses on environmental change in the Arctic, where he has completed over three decades of fieldwork and data collection spanning the entire circumpolar region.

His research has played a key role in moving the study of paleolimnology from a largely-descriptive discipline to a quantitative and precise science, with a wide range of applications. Many of the novel approaches he and his colleagues developed have been adopted around the world and have influenced changes in public policy. Part of his citation read during the induction ceremony emphasized “his tireless efforts in bringing his socially-important scientific conclusions on climatic and environmental change to public attention.”

”I often work in contentious circumstances, identifying new environmental problems,” says Dr. Smol. “Many industries and certain politicians would certainly prefer that our work would simply disappear, as we frequently provide ‘pesky and inconvenient data’ for CEOs and shareholders.  One thing I learned is that the more prestigious the awards, the greater the likelihood that our research will be shared and valued.”

Dr. Smol has received over 60 national and international research and teaching awards. These include three medals from the Royal Society of Canada (RSC): the Miroslav Romanowski Medal for Environmental Science, the Flavelle Medal for Biological Sciences, and, recently, the McNeil Medal for the Public Awareness of Science. He is the first scientist since the establishment of the RSC (1882) to win three individual medals.

“It is an immense individual honour to receive a fellowship in Britain’s Royal Society, but also one for Queen’s in having one of its researchers join the ranks of the world’s most respected and accomplished scientists,” says Daniel Woolf, Principal and Vice-Chancellor. “I offer Dr. Smol my most profound congratulations.”

In addition to his Royal Society accolades, he has won the Gerhard Herzberg Canada Gold Medal for Science and Engineering, and he was co-winner of the Brockhouse Canada Prize for Interdisciplinary Research in Science and Engineering, Canada’s highest honour for interdisciplinary research excellence in science and engineering. He was named an Officer of the Order of Canada and received the Weston Lifetime Achievement Prize for Northern Research as well as being named an Einstein Professor by the Chinese Academy of Sciences. Amongst his 13 teaching and mentoring awards is the 3M Teaching Fellowship, considered to be Canada’s highest teaching honour.