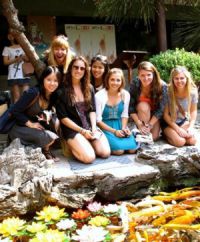 Julia Marsala (Artsci’14) is from a small farm town in Pennsylvania, so when she stepped into the megalopolis of Shanghai, with its more than 23 million people, she felt a little overstimulated, a little overwhelmed.

“The sheer number of people on the streets – it was nothing I’d ever seen. It was culture shock, but not in a bad way,” she says. “The city and China in general forces you out of your comfort zone, and when you do that, you learn a lot about yourself.”

Ms. Marsala was one of 10 Queen’s students who studied in China last fall as part of the Semester in Shanghai program, which was coordinated last year by the Department of Languages, Literatures and Cultures (LLCU) for the first time, after a transfer from the Department of Global Development Studies (DEVS). DEVS established the Semester in Shanghai program with Fudan University in 2005 and it has since been recognized by the Chinese government as a Model Bilingual Education Program.

“Under the LLCU, the program is accessible to a larger group of students across many disciplines,” says Professor James Miller (Religious Studies), coordinator of the program. “It really is a chance for students to experience this rapidly changing country, beyond what they see in the news. China and the decisions it makes over the next few decades will have a huge impact on the world, and it’s vital that this generation of students both experiences the country first-hand and understands its history and philosophy.”