Sahiba Gulati is the recipient of the Margaret Hooey Governance Award for her role as a student Senator for the Arts and Science Undergraduate Society.

Throughout her time at Queen’s, third-year biotechnology - specialization student Sahiba Gulati has made outstanding contributions to the good governance of the university through her work with the Senate and committees. 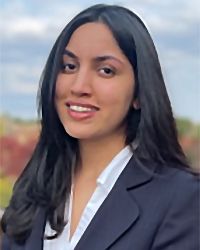 Like, Margaret Hooey, the longtime Secretary of Queen’s, Gulati has shown dedication to principles of service, mentorship, and friendship, leading to her selection as this year’s recipient of the Margret Hooey Governance Award.

“It is an incredible honour to be chosen as this year’s recipient of the Margret Hooey Governance Award as I look up to the great contributions that Dr. Hooey has provided to Queen’s,” Gulati says. “Being recognized for the hard work that has been done on the various committees feels very special, and I hope to use it to continue making change at Queen’s and follow in Dr. Hooey’s footsteps.”

Gulati has served as a student senator representing the Arts and Science Undergraduate Society (ASUS) from 2021 to 2022 and was also a first-year representative for her program.

Gulati is an active participant in all facets of ASUS and has been a member of several grant committees and worked as an ASUS mentor. In addition, she is engaged with a number of campus organizations dedicated to equity and advocacy work, such as the Queen’s Women’s Health and Advocacy Club, Queen’s HOSA, Queen’s Global Medical Brigade, and ThornQ.

“Before I was on Senate, I was unaware of the many staff and students that it takes to draft a policy or proposal for no matter how small that change is to be passed in Senate,” Gulati says. “You start to see the amount of hard work that goes into every decision, making you appreciate everything more.”

The Margaret Hooey Governance Award Committee was unanimous in its decision to select Gulati as this year’s recipient.

All students involved in the Senate and Senate committees are encouraged to apply. The deadline is Feb. 1 each year. Learn more about the Margaret Hooey Governance Award.